This walkthrough is aimed at providing a starter template for weaving Webpack into your front end Django workflow. Our goal is to create a project template that allows us to keep all of our source under version control, process our front end code locally with Webpack, and push everything out to production from Git.

Fire up a cup of tea, get ready for some command line use, and let's run through what we're going to do.

Or just skip all of this and grab my project template from GitHub.
django-webpack-scaffolding.

Set Up Our Development Environment

Go Over Our Production Workflow

For additional details on using Django with Webpack and for further integration with ReactJS see Owais Lone's excellent article.

Requirements: Some understanding of Django, Python, Node, and Git. See this article for an overview of Git if you haven't used it.

Webpack's advantages are many. Chiefly it will process Sass (I've included Sass loaders, but you can also use Less.) Additionally, we can start using ES6 Javascript syntax and framework goodies like ReactJS. When we're ready, Webpack will wrap everything up into a beautifully uglified package.

But for your dev setup, make sure you have Node, NPM, and Virtualenv installed.

You know those clear plastic boxes with lots of little compartments for organizing nuts and bolts and screws? That's what a Virtualenv does. They keep our Python dependencies together in one place.

Open a new Terminal window and create a new virtualenv. I like to create them in a master projects folder called: ~/virtualenvs. Feel free to change this and do whatever you want, and feel free to replace projectname with the name of your project.

This should give you a folder structure like this:

And then we need to activate the virtualenv using the command:

Start from the Template

Now we can build our project from the template. The startproject command accepts a parameter called --template that will grab the project from Git. By all means, please replace projectname in the command with the name of your project. ( We're still in the same virtualenv folder .)

>Troubleshooting Tip If you have many virtualenvs, sometimes DJANGO_SETTINGS_MODULE can stick from another project.

When installed, our virtualenv directory should look like this:

Now we need to install Django dependencies. (In this case, django-webpack-loader.)

Once running, Django Webpack Loader will look for the presence of a webpack-stats.json file, which will tell Django where to find our static files depending on the environment we're in.

I like to use a split-settings configuration in my Django projects. Splitting the settings file allows us to change the environment we're working in from within the virtualenv. This saves us from needing two separate settings files that are outside of version control.

Open ../bin/activate in your editor of choice and paste the following at the bottom of your file (change projectname to the name of your project)

Then activate the environment again to apply the settings change.

Now we need to install Webpack and Webpack's supporting modules. My Django project template includes a package.json file that will allow us to install everything through npm.

(Npm will warn you that you need to update package.json with your description, version, and repo. Go ahead and do that at your leisure.)

If everything installed correctly, you should have a wall of text in the terminal but no big red error-looking stuff.

>Note: We can skip this step for production since we're building our production JS locally and committing it to source.

Nice We're getting there. Now is a good time for a refill.

Package.json contains some npm shortcut commands that assist in building our asset bundles and running the dev server. Let's test our Webpack config by making an initial build.

This command creates a folder called /static_src/bundles which is like the staging area for Webpack. Static assets are served locally by Webpack Dev Server from this directory.

The npm run build command will also create webpack-stats.json, which will tell Django how to assemble the URLs of our static assets.

The basic workflow is to run npm run build when you're in a good spot and ready to commit code changes.

Let's kick the tires and fire up Webpack Dev Server. The dev server will monitor our files for changes and continuously build automatically.

The terminal should output a few messages, the first should let you know that the dev server is running on 0.0.0.0:3000 If everything worked, it should look like this:

We need to leave Webpack Dev Server running in order for it to serve our static files. So open up a new terminal window and activate the environment (The new window should open to the same projectname directory. If not, cd there.)

We might as well create an initial migration first, since Django will give us a warning.

We should get this output if it's working:

Check it in the browser 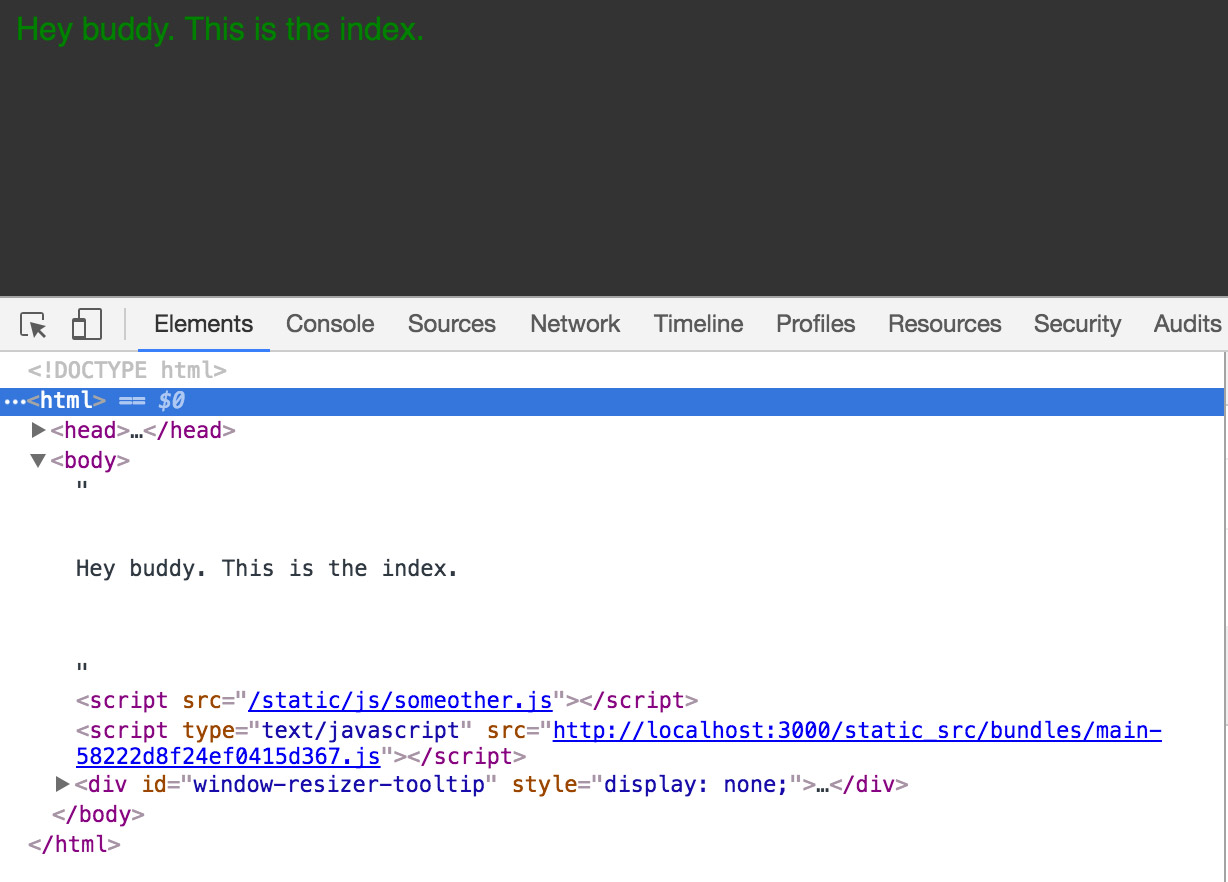 POW! Congrats! You're rocking with Webpack and Django!

When we run npm run build it will write our changes to our static files to /static_src/bundles/ The bundles folder also contains a map file, which is useful for debugging.

Since part of our workflow involves committing everything to source, we need to create a production bundle and commit webpack-stats-production.json before we push our project.

Head back over to the terminal running Node and enter ^c to cancel the watching process.

Now we can run:

This will create a new folder under /static/dist/ with our minified production bundles, and our webpack-stats-production.json file that will tell our production Django how to grab our static files.

If you're keen to give it ago, we can test the production bundle locally by making a few changes to projectname/config/settings_development.py

First set debug to False and ALLOWED_HOSTS to ***

And then collect static. The collectstatic commmand will grab all of our static assets and copy them to the STATIC_ROOT defined in our settings.

If we look in the browser console, we should see that our static assets are serving from /static/dist/, and not from http://localhost:3000/

Now let's Flip debug back on in settings_development before we forget!

And you may ask yourself, how did I get here?

Yes, that's from the Talking Heads. Let's take a second to go through our virtualenv folder and see what we've created.

Now that we have everything we need, it's a good time to initialize a new project repository from the projectname directory, commit, and push it.

If you follow the article, skip the step: "Create the Django Project" and instead, clone the project we created, and adjust projectname/config/settings-production.py

However there are many ways of running Django in production. Your production setup will likely differ from mine, so let's talk workflow.

Let's say we've squashed a bug in the front end. Before we deploy to production, we need to tell Webpack to bundle and compress our static assets.

This command sends our compressed assets to our static distribution folders in
static/dist/js/ and static/dist/css. It will also update webpack-stats-production.json which Django Webpack Loader uses to determine which static files to use based on our Webpack config.

When our build passes, we're ready.

I put up my test example in Git here Feel free to take a peek!

Where To Go From Here

Now that we have a starter project template, we can start adding cool things like Django Rest Framework and ReactJS.

Thanks for following along! Enjoy working with Django and Webpack.